A podenca, struggling to survive in the wild..  A reocurring bone infection on a bad fracture. Safe and rescued, now moves through lifes paces to her very own forever. 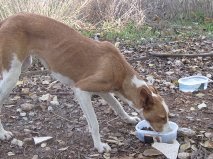 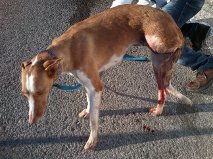 The "Its ok hug!"You've made it to safety Ana. Just out of the clinic after amputation 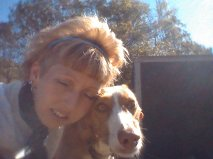 This is a pose and a half! Says serenity all over it and peace! 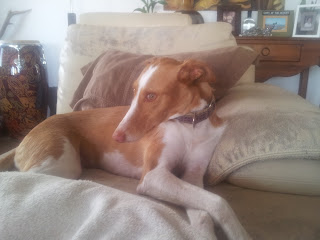 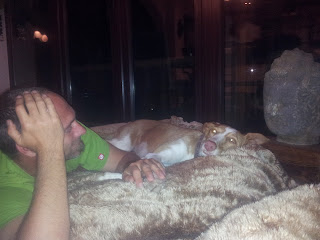 Ana and her now official PAPA! 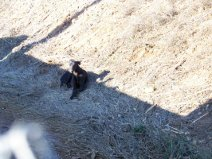 Down and out! Skeletical in Sevilla. Giving up on life, Pain in his leg from a probable trap, fractured and healed. Alone in the wild.. for this is survival. Rey is a KING. 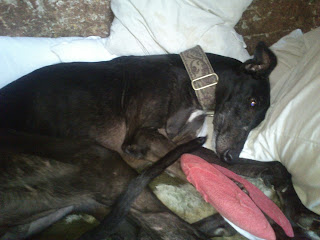 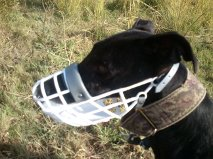 Reys hunting instincts are high, its how he has survived. Here he wears his galgo muzzle in pride, he sees the lead come out and his nose goes up, ready for his muzzle. Rey has an innate understanding of what special is, and he sees that individual treatment just for him makes him special. He sees nothing as against him, or punishment, he knows the muzzle is just for him, and he wears it proudly. The KING of KINGS! 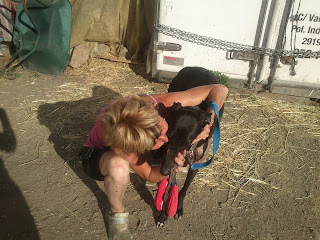 A collar for a king! 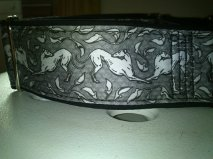 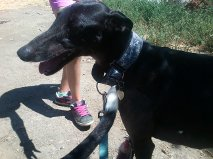 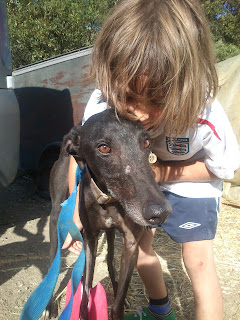 Neizan "I love you Rey."

Dear friends of ANA and REY!

Fate steps in and lends a hand to these 2 incredibly special cases.
Ana a desperate case in Valencia wandering around in agony, a reocurring infection of the broken bone. Agony for Ana.

Ana came to us and we had to treat the infection, and then again before admitting her to surgery. Ana lost her leg but gained her life! Had she not had this surgery and been unable to be caught she would surely have met an agonising end.
Ana is a podenca with a grace and serenity about her. Her eyes pierce your soul as she tells you her story. Theres no sorrow, no me in her look, its all about you! Ana has a gift, she is so intune that she knows when she is needed, she knows when she has to gain your attention for a greater need than herself, and she knows when she needs to prop you up! A soul mate, perhaps!
Ana joined Sandra and family as a foster podenca. A noisy pod, with alot to say about herself. theyve not had it easy by any means.. a pod with no home training takes on your patience. Ana adored Axi, Chikas brother and Anas foster brother. Rhodesian Ridgebacks. Axi had special needs, and Ana was in tune. When Axi needed something she would stand over him and bark.. bark until Sandra had attended his need.

Falling in love, her with the family - and the family with her. Grace and love never fails!

At the same time, Jen a great friend of the galgos and 112 Carlota galgos had fallen for Ana, sadly Jens Greyhound Honey crossed over to rainbow bridge recently -  and left a space which Jen offered to Ana. Jen is part of an asoc for Greyhounds in the UK. (East Riding Greyhound Trust.) An avid campaigner for all animals in need. Expanding love from Ana to all our galgos in care, Jen also took to her heart REY! Asking for him, and always concerned for this needy soul.

REY. KING of KINGS!
Rey came to us via Sevilla, a friend named Cristina, a member of her team had rescud him in appalling conditions, he'd given up, lying there in the dirt too weak to carry on. She scooped him up and took him to her colleagues house and he stayed there approx a month. Needing care and attention, he and Polyana (already adopted in the UK to a foster home of Jens and East Riding Greyhound trust) both needing individual care they came to us together.
Poly blossomed and came out of her shell. Rey, he existed. Showed little personality, he was simply.. just there!

He ate, he drank, he walked, he didnt play, and he didnt love. Taking time his vision on life was changing, he was no spring chicken, at 7 he is a galgo who had fought to survive for his galguero, and then on the streets. He came with an old break, healing itself, so clearly on the streets for sometime. A trap, a snare, .. quite probable. An instinct to hunt which has kept him alive he showed me that he needed an experianced home, and someone who would understand the explanations of what a serious hunt instinct can be.

Rey over time, began to show pain in his break. There was no alternative to operate. It's here Rey found friends from across the globe.
Reys surgery was massive, good bone taken from the opposite shoulder and implanted into the break. Mass atrosis done to the bone area, and tendon area. The operation would leave Reys leg in a straight position, no longer able to move the "wrist" action. The surgery was opted for to save Reys pain. Tiring of it, weakening from it, we had to give back to Rey what life had taken. Days pain free.

Amazingly, its seemed to me the world heard about this special boy. Auction running to my surprise, all for REY! An expensive surgery, but one intricate but successful. Rey came home with 5 screws in his leg. He is doing well, and so is my vet thanks to Reys amazing global friends. He usually quivers when he sees me, yet still when I pull up outside the clinic door without parking will rush out and ask "what have we got" incase its an emergancy! There is an amazing feeling inside when you say to your vet, Id like the bill because you know you can pay it! Shaking the vet says leave it in the computer.. and I repeat.. no Im asking so I can pay you!!!!

This week has been one of the most special Ive had. Its one of the reasons I continue. The force of love shows me, it never fails. When its true, and pure, it never ever fails.

On the auction, I saw the most stunning collar, photo'd above. I stated this on the auction, that it was the most beautiful collar Id ever seen.
This week a parcel arrived - the most beautiful collar inside it. Thankyou Jan! Rey wears his collar in pride. A true KING! I believe this brought a gift of love, for yesterday I went to visit Ana in her foster home. Greeting me, and peacefully wandering around, Sandra and family extended their love so much to Ana, that they are going to adopt her. Its here she will stay, forever! She has made it!

Discussing this with Jen, always aware of Rey and caring for his needs, Jen offers REY his forever home.
Its as if, these 2 innate special dogs have been working together to help each other in their forevers at the same time. It feels like fate has taken a hand, and shown these two souls they are and will forever be.. loved.

To the most amazing Mums and families, I cannot thankyou enough. Its just meant to be!

Rey will stay with us for sometime as his healing process is still early days. Heading onto the end of summer, if the vet gives him the all clear, is when he will be heading home to his family. His very own family.

I know that when we are forgotten, they are truly home. They have both made it, these 2 special souls.

So.. how can I ever thank such kind people, such pure kindness has led directly to these very special dogs being cared for, operated on, and directly to their forevers. It's a reminder of just what people can achieve.
Seeing pain everyday can lead you to lose faith in humankind, but these two cases, REY has taught me something I will never ever forget. On the weaker days, when my heads in my hands, when I wonder what Im doing? If Im even helping at all, how to continue, how to keep going.. Rey has taught me as Ana has, LOVE NEVER FAILS!

Continued updates on Rey I will write, for he will be with us sometime yet.

My most sincere thanks, deepest gratitude to one and all. Without you, this could not have been achieved!
May you be blessed as you have blessed us in letting us care for Ana and REY .. without you all, my head would still be in my hands. Now, they wave in the air in joy, in thanks, .. and pride that we are witnessing two cases, on the same day, with special needs reflecting to one another, their forevers. To add to the special feeling, when REY goes home, he will see his stable friend and partner with who he joined us with. Polyana! cant get more special than that!

In galgo affection,.. to one and all, my most heartfelt thanks.