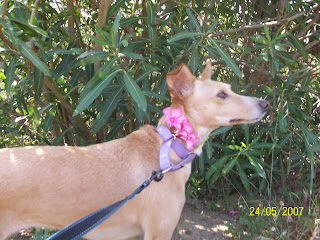 Somewhere out there, beneath the deep blue sky.... 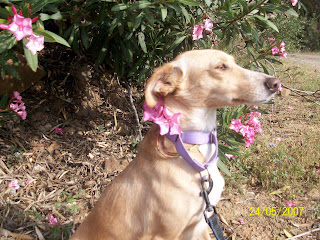 Angela.
I have so many words I could use to describe Angela and her stay with us at 112 carlota galgos stables. Yet I would not have enough room.
Angela has spent the most time with us at the stables with not a flash of hope of a family. We never understood why as she has soul, but perhaps it just was never her time.
Angela came to us via Susana. Angela brought us an amazing woman who comes without fail to help once a week, bringing with her bleach, towels, whatever is needed. They were made to meet!

Angela was recued from abandonment in horrendous pain. For she had clearly given birth, but had no sign of her precious babies. From the condition of her chronic mastitis it was clear she had been wandering around for days in this way, how many we just didnt know! Broken hearted, low and in agony. Lost and alone, she was probaly looking for them since its common practise here to throw out the mother and keep the babies.
Noone would take Angela in, no asoc. in any area. Susana very aware of the perreras actions, went to my vets. It was sheer fluke we were leaving as she came bursting out of the clinic door. Running towards the van I opened the window. When she told me, I didnt hesistate. If we have a space, I say yes. I dont think twice. Poor Susana burst into tears. Asking when we would take her, I said right there and then! 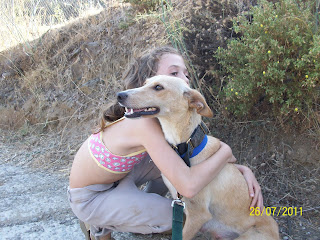 "Tell me where your babies are, and we will go and get them for you!"

Instantly she went onto further treatment, cold compresses, and tlc. Several antibiotics and Milk drying tablets. Sofia embracing her wounded soul said to her "Tell me where your babies are and we will go and get them for you". For Angela Angelica was destroyed. Her will robbed from her as her natural instinct was to care for her young, robbed from her, they may as well have robbed her life.

Angela took time, she needed to heal her wounded aching heart, and as the infection lowered the process of her aching heart began.

This lil podenca, was invisible. To us at the stable, she became the very heart and soul of 112 Carlota galgos. Always there always sweet. She nursed the tiniest of podencos, lil Lucy at 6 kilos through all her treatment, she stayed by her side she said it was ok. 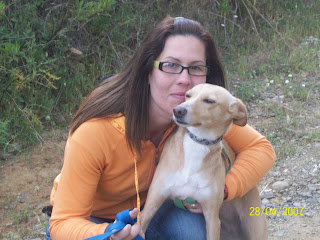 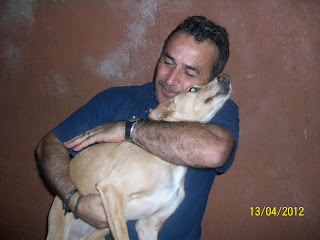 A squidge for Angela, a man with a heart! 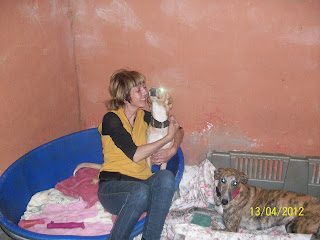 Ohhh the days weve spent Angie, and moments like these where we sat and talked and you curled up on my lap and I held you. Telling you one day ... will be your day. Here the count down to her forever home takes place. 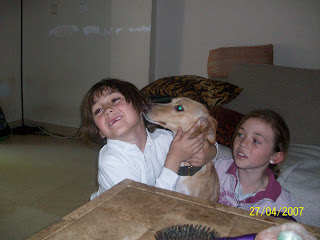 Ohhh HELLOOOO Neizan, KISS ME BACK!!! 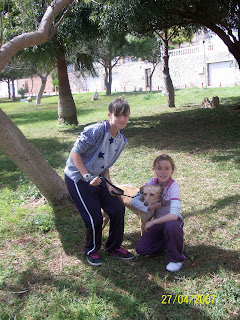 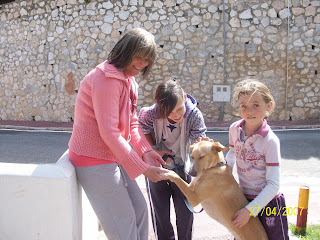 Just stopped for a chat, but boyyyy do these cuddles feel good! 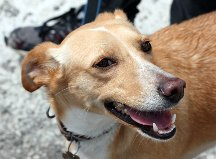 A smiling Angela, always in our hearts. 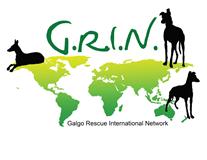 She sat tight through other recoveries as if she knew, this is my role. She became the mother hen to them all. She watched so many come in,and out. Placing her nose to many welcoming them in her way "it's ok here, youve made it!" A moment I will never forget, a day before Angela left we had a new intake Marci and Apolo. As if Angela knew she was leaving we walked them together and she did, she touched their noses as if she was saying, "its ok here, you're safe!"

Always there, always loyal. Friends with all who entered, and entering into their hearts.

Angela, you are missed. You formed a bond which will never be broken, the most special dog I have ever had the pleasure to care for.
I know for you, this adjustment has been hard. So long at the stables, this was your security but now baby girl.. you are home!

Travelling across land and sea, she now lives in the USA! A spanish podenca, abandoned, unwanted, misunderstood, yet the most caring Podenca Ive ever come across. The most genuine and sweet. So very deserving of her new home, and the treasured help by all who took her there.

In galgo affection, and in our hearts forever more. Enjoy life now Angie.. its all yours for the taking!

Charl, family, Susana Debbie and family, and ALL the galgos and podencos you have helped... you are always with us!