A new life, a new beginning! Un a nueva vida! 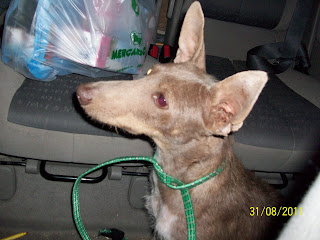 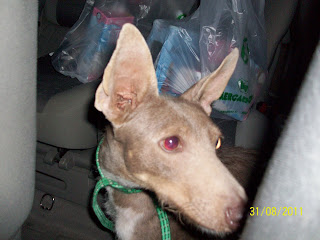 On complettion of preparation, Canela will be in adoption.
Twas the night before last and as the sun went down, it was the beginning of a new time for Canela.
For Canela a pure podenca with ears so piercingly stunning and orange eyes,.. who would look at you but fear you.

ERA LA NOCHE ANTERIOR Y SE IBA AL SOL, TERMINANDO EL DIA PERO UN NUEVO TIEMPO PARA CANELA. CANELA UNA PODENCA PURA CON OREJAS TAN LARGAS Y OJOS BONITOS AMARILLOS/NARANJAS.. PERO CON UNA MIRABA DE MIEDO.
A bit more than a month or so ago a friend mentioned about a possible Galgo, wandering locally. I knew it couldnt be a galgo since we dont see them wandering the streets here. A podenco yes! I went to drive around on several occasions and asked her to keep an eye out. It seemed to have gone. 3 weeks ago she mentioned to me it had disappeared.. or maybe coming at times when she wasnt there. To no avail, no sighting.

Suddenly a lady went into the bar where Lisa works and saw our 112Carlota galgo sign in the bathrooms, she commented to a member of staff about a whippet, they phoned Lisa and she said the lady sounded emotional about the case. She had been feeding it on the other side of where my friend lives. This isnt much distance away, its all urban but wouldnt be possible to sight it from where my friend lives. She told Lisa she feeds the dog but cannot get near it. It only eats when she leaves the food.

So Lisa called me and the night before last I decided once finished my Galgo duties, I would just go and take a drive around to see if I saw anything. Again, I knew it wouldnt be a whippet and already had mentioned to Lisa Id put money on it being a podenco.
I rang the bell of the block where my friend lives, its dark and late, but to ask if she had seen anything. We decide to drive around together equipt with famous salchichas.. (hot dogs) and then suddenly just before us at the end of her road,.. a tiny figure of a podenca with huge ears crosses the road with such fear.

All of a sudden way at the end of the road a young girl comes out with her sister about 16, they whistle and she scuttles off to where they have been laying food for quite some time. They cannot get near either, she comes when the food goes down and she moves away. Unable to touch her she is wild to the urban streets.
DE REPENTE VENIA UNA CHICA CON SU HERMANA, JOVENES SILBANDO Y LA PERRITA FUE CORRIENDO HACIA ELLAS. SE PUSO LA COMIDA EN EL SUELO Y LA PODENCA FUE A COMER, ELLAS TAMPOCO NO PUEDE ACERCAR LA, ELLA COME CUANDO ELLAS SE VAN. SALVAJE EN LAS CALLES URBANOS!

Chatting with the girls who are clearly distressed and wonder who I am, and worried for this poor soul. while I continue to catch the podenca my friend explains who I am and that she will be safe. The young girl in tears, concerned about the entire thing. Overwhelmed.
HANBLANDO CON LAS CHICAS QUIEN ESTAN PREOCUPADAS DE QUIEN SOY YO? Y PREOCUPADA PARA LA PERRITA! MIENTRAS QUE YO SIGO CON LA PODENCA MI AMIGA EXPLICO QUIEN SOY Y QUE HACEMOS.

She is nervous, and at the moment would escape. She is clearly an expert on rough living. Once she has had a few days to settle in, we will start her tests. A few days to observe her treat her intestinal worms, bathe her in correct shampoo for her skin, nourish her and let her know she is ok. We will then begin to prepare her.
If you would like to help us with Canela, we would be extremely greatful. She needs good nutrition and a lot of care.
ELLA ES NERVIOSA Y DE MOMENTO ES SUPER ESQUIVA UN BUEN EJEMPLO DE COMO SOBRE VIVE EN LA CALLE. YA QUE SABEMOS NO TIENE SARNA, EMPEZAMOS CON LAS PRUEBAS. DESPARACITACION, Y BAÑOS.

Canela, this is a new time for you, a new life and we hope a new love will spot you.. and offer you your forever! Theres a whole new world waiting for you!
CANELA ESTO ES UN NUEVO TIEMPO, UNA NUEVA VIDA, ESPERAMOS QUE ALGUIEN SE ENAMORAR DE TI, Y OFRECER TE TU "PARA SIEMPRE!"