HUNG GALGOS!!! Fates sealed by ignorance and owners lack of need for them! 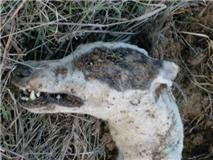 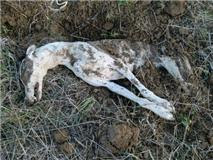 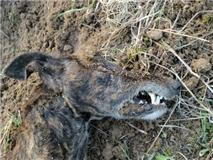 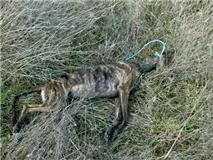 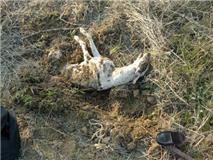 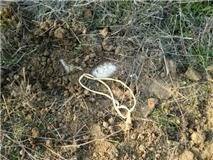 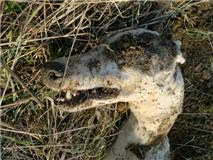 Hanged galgos for the first time in history we will go to court!!!

This case is being investigated by the court of Torrijos and the hunter faces a prison sentence.

The animals had a microchip,which helped to locate the culprit.

Madrid 3rd March 2011.
On February the 10th,last month,the bodies of three greyhounds were found, partially buried, near to the sewage works in Fuensalida (Toledo). From the very beginning the investigators suspected that the owner of the dogs was responsible for their fate.He later confessed. In his statement to the authorities he confirmed that " he was the owner of two of the dead greyhounds and that it was his usual practice to hang the animals once the hunting season was over"He added that " he thought this method better than abandoning the greyhounds like some others did".He declared that " he did not now that it was a crime to hang animals"
After the discovery of the corpses the animals are now awaiting an autopsy in order to discover whether they were ill treated or if any cruelty existed. Two microchips were found in two of the dogs,thus facilitating the location of the owner of the dogs.

These facts confirm that this practice,which some consider as "normal" still exists and is passed on from generation to generation in rural areas.The latest legal amendments with regard to cruelty to animals have changed what was once considered an error, into a criminal act,which holds the perpetrator resonsible for his actions.
However,the practice of hanging greyhounds once the hunting season has ended,or when the animals are of no further use,continues to be commonplace in Spain.

The BaasGalgo Association, an organization which fights for the welfare and protection of this race of dogs is acting as the private accuser in this case.
In fact volunteers of BaasGalgo,after being alerted by local residents,located the corpses and informed the local Police and the Civil Guard .
For many years now BaasGalgo has promoted many acts of solidarity with the prime object of informing the general public of the real plight of the greyhound in Spain.

The reality of the greyhound in Spain.

It is estimated that thousands of greyhounds are ill treated each year in Spain.In many cases,the greyhounds that are no longer of any use to the hunters are abandoned or cruelly sacrificed .Although no official statistics exist,the associations which defend greyhounds estimate that the number could be as high as 40,000.
Ignorance,fear of presenting a charge and the lack of animal protection laws,aggravate the problem.

The Baasgalgo Association are a group of volunteers who for the past ten years have been fighting for the rights and well being of animals,especially greyhounds.
This Association stands out for its iniciatives which have enabled important advances in favour of animal rights.

BaasGalgo assigns the TOTAL of the help received to the care and defence of abandoned greyhounds,colaborating with other associations and animal shelters.They also manage the collection,transfer,care and adoptions(both National & Internationa) of more than one hundred greyhounds every year.

The Association BaasGalgo also works to help in the continual development of social actions to raise awareness of animal rights and well being.