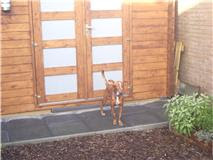 OCO.. This is MY new house! 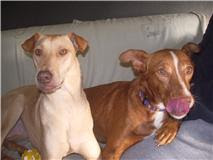 Oco and Gringo, together forever! 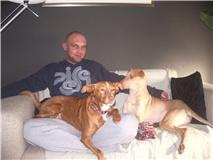 Coen with his boys, Oco and Gringo! Happily ever after! 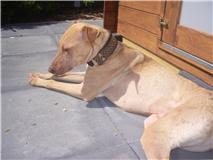 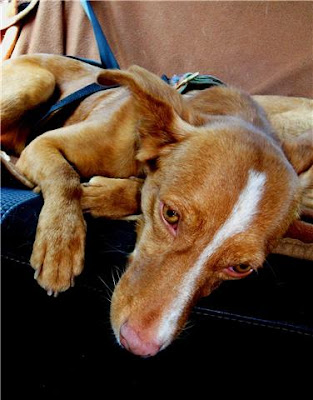 OCO on the way home with Frances in her car! 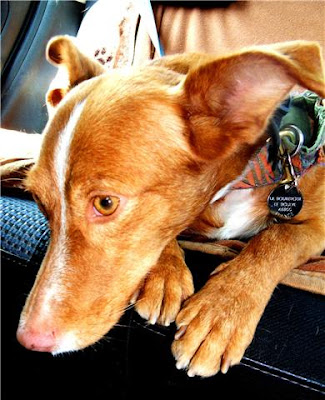 Again.. in the car with Frances. 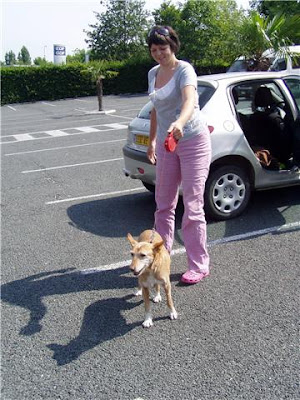 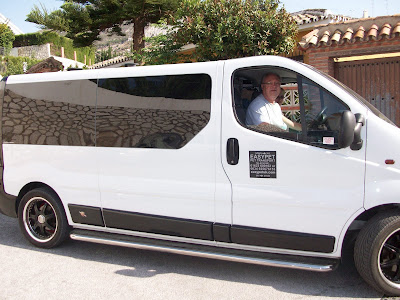 Thanks to Easy Pet for great service in taking Oco & Gaby! 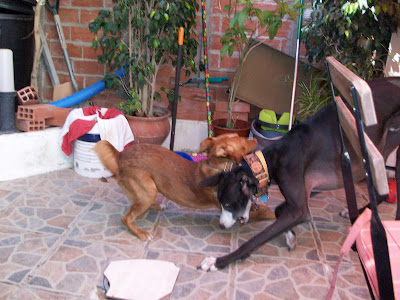 Ambo.. Oco's 1st Foster brother trying to show him how to play! 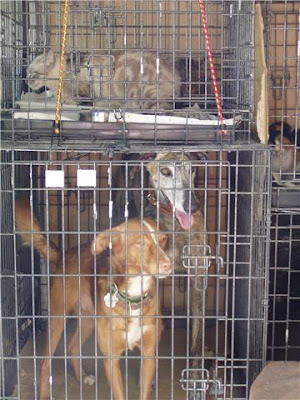 Ocos incredible journey begins here.. his trip to France with Gaby to Frances! His new foster mama. Thanks Frances for his new start, and Beryl from Galgo News for placing ocos Case. 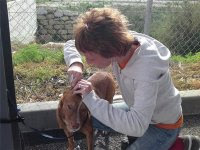 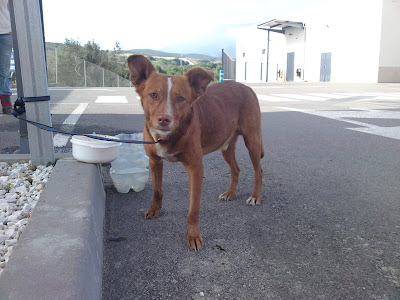 Summer 2009... RESCUED from the streets of Estepona.
OCO.. This is Oco!!
In the summer of 2009 I was called regarding an abandoned Galga on a hunting area in Estepona Malaga. Over an hours journey to get to her, we went as often as we could to try to save her. Sadly Dona named by Marie just wouldnt take her chance and no matter what we did, how we tried her fear took her over and we lost her.
On one of the occasions we were there a little scruffy, dirty podenco arrived. He wanted to play, inquisitive and unsure, hungry but was clear he was smart enough that the food which was laid daily for Dona he was helping himself to. So he wasnt thin. A wormy tummy yes, and horrendously long nails on his back paws which curled around. Lame he hobbled to us and away from us. "Any hot dogs spare?"
The day we took the trap my intention was, I was never going to leave him behind. As much as we wanted to catch Dona, I wanted to rescue this little boy as well.
He so helped us out!!!!
While waiting for Dona along came the dirty scruffy podenco!! He sniffed the trap, the juicy meat just toooo good to leave.
Entering carefully as Encarni from DDEVIDA and I were actually standing close by the trap, he took his chance. He walked in, but cleverly didnt stand on the leverage to make the door slam. With a SWIFT hand movement from Encarni she slammed the door down and he was forever saved!
This is Oco's First stage of rescue!
He patiently waited while we spent the entire day and most of the night waiting for Dona to enter the trap, to no avail. Silently he sat in the car to go home.
Washed , deticked, deflead, wormed, and fed.. To our surprise Oco had a chip!
We called the owner who was surprised to hear from us.. a hunter "of course" - who stated he had given the dog to a friend of his the year before.
Of course this friend didnt seem to have a phone number, and we were interested to see that this hunter who to us, no longer wanted his podenco and at 4 (if it was the truth) had disreguarded of him the year before at 3, proves this little podenco had a hard up bringing. From his reaction, an opthamologist - Id say he was on the streets way before he was 3! He stumbled to explain his way out of owning the dog, and at being told he is the legal owner its his responsibility he agreed to sign over the podenco to us. Having said that, at our expence. He didnt want him, had "got rid" years before, but would not pay the change of ownership nor come to meet us. We paid it and had to go all the way to his opticians for him to sign!
So.. legally ours..
His tests were done. Negative in everything - what a joy! He went to stay with a foster family and was castrated. He cried alot, when you went to touch him he would yelp. Scream. He screamed after his castration which was so sad.
The foster family couldnt keep him, now named OCO. So heres where Frances steps in.
Thanks to Galgo News Frances spotted him and decided to offer him a place of salvation. Oco spent the summer months with Frances. She dedicated many hours to working with him, teaching him what a "home environment is" the rules of the house, and outside the house. It's not easy, and its not easy to get attached either. Oco just wins you over.
Towards the end of summer Oco was spotted by his soon to be papa. His forever PAPA!!!!
Coen, Pierre & Gringo( their other rescued dog) step up for Oco!
When a dog chooses you, it's very hard to deny it. For me, great lengths and expence were made from this wonderful family to take Oco home to Holland. Patience and timing were everything. Coen had been looking on GALGO NEWS (www.galgonews.com) curious about a podenco he had spotted. However Oco came up and as I say when a dog chooses you, you can only go with it and offer them all your heart. Coen fell for Oco and Oco's safe secure future was decided. Oco was to enter into Coen, Pierre and Gringos family!
Heres his story:
Gringo had a skin infection and due to caring for him in strict hygiene and loving condition, Oco stayed in the care of Frances.
We were THRILLED that Coen had seen Oco and fallen for him. It was a pleasure to wait for the perfect timing for Oco to finally "go home!"
Several months passed and then the adoption took place.
The dilema then was just how to get Oco to Coen?
Coen didnt stop there, he took a flight which had been delayed and transferred a bus.. to meet his new addition to the family. Every detail covered to make sure Oco was going to travel with the least amount of stress. Frances waited at the Airport with Oco and on arrival met Coen.
On the return trip also meeting dilemas to do with a strike, together they caught the bus to the rerouted plan of travel, and finally late at night made it HOME!
We are truly greatful to Coen and Pierre and Ocos new brother Gringo, also rescued from Spain. A new life for Oco in safety love, and peace.
Enjoy the photos of this wonderful tale, his journey really was the incredible journey!!
THANKYOU to you all, GRIN who helped fund Oco, Frances who cared for him. Anita in the beginning, Ddevida who were there at the time of rescue. Galgo News France for placing his story, and to COEN & PIERRE & GRINGO!