Oco a little podenco with a BIG heart .. Oco you have touched our lives as we cared for you and hope that your time with us has helped you develop into a family pet, where you will find love and honour and be cherished for who you are. Found cast aside as a "hunting dog" rescued while trying to rescue a Galga in Estepona Ocos life changed.

Staying with us for awhile he got used to family life friends routine, not just where the wind took him, and a kind hand. Fron there an offer of a foster home came and Anita and Omar took him him. While staying with them he had his tests done and check ups, castration vaccinations and care needed. My greatest thanks to them for their care.

Oco came back to me several weeks ago and we began to reassess. Id of loved Oco to have been adopted where we can keep him close, but the best news came when Frances and Ross friends of Beryl www.galgonews.com (hope you are all buying your From heaven to hell books!) came to me and offered themselves for Oco as a foster family.

Here is where easypet stepped in. Not only having had a great offer of a home for Oco and from there his future decided when a forever home comes, I wanted to send oco in what I considered the best and most comfortable way. We all know when sending rescue dogs MRW are the ones called, and other couriers also. I felt after the struggle to catch the galga and the way oco was found that he should depart as if i was taking him myself. EASYPET didnt take me long to find nor gain my confidance. A few calls with Trudie and offering to let me see the van and Air conditioning assured me that he would go in the best style.

I met Steve and I was so glad and at ease to see his enthusiasm for his job, but caring. I could see just how he looked after his van and how he took pride in his travelling animals to where they needed to go. This set me at ease. However the day he left 29th june I was nervous, like sending off a child. I had several texts from trudie letting me know where they were and all was well. Even at nightime. I was over joyed at the care they took, and the importance that they put on letting me know.
On arrival there are photos below of moments where Oco wont have known whats happened, but arrived in comfort with gaby, a galga from Murcia also picked up on route and Beryl taking her in, a great travel buddie for Oco. Thos emoment sof unfamiliarity didnt last long.. take a look at the photos in the car home, and then at home on "the SOFA!"

My sinserest thanks go to Frances and Ross for opening their home to Oco, to Beryl, to Telma, a fantastic friend of mine who helped me in financing Ocos journey. I so felt it right for him to travel the best way and EASYPET, for travelling our rescue case OCO to safety. 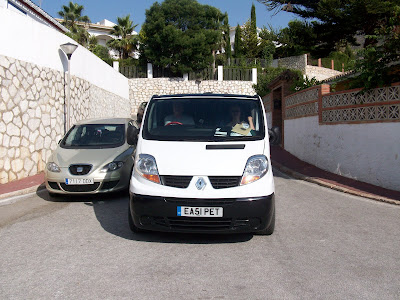 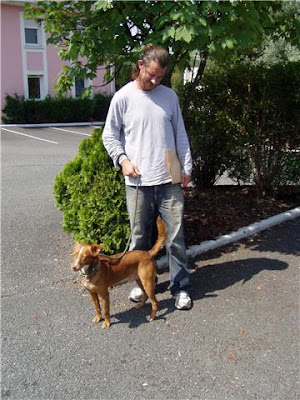 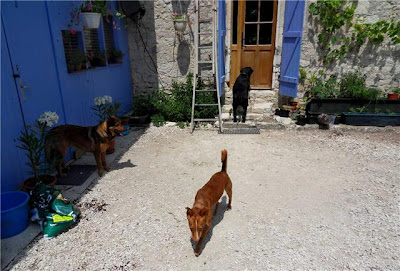 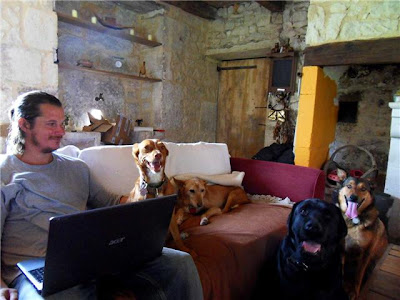