A Story which still brings tears to my eyes... 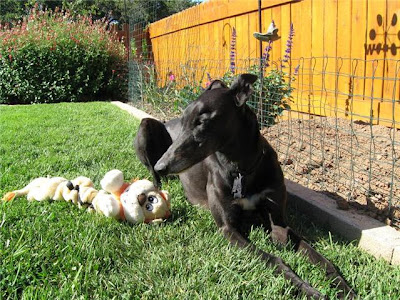 How I love to see a galgo and his teddy!!!! Just Gorgeous!!!!! An ABSOLUTE AMAZING Rescue and groups in action to save Greyhounds.

Introduction:
Fernie was one of 153 plus Greyhounds who were rescued when the track on the island of Guam was closed suddenly in Nov.2008, and the Greyhounds were “ given away” to anyone on the island who wanted them. Weeks later Greyhound advocates in the U.S. heard about the neglect by these people who took them and stories began emerging of Greys being tied to cars and boats, starving and abandoned also in the jungle. A huge rescue ensued and included a phenomenal group in Southern California called Homestretch Greyhounds who received the dogs from Guam, housed, vetted as needed, and then moved them on to other groups all across the USA and Canada into forever homes. Most of the dogs were moved off the island in 2009 with a few still trickling in even this last month of May 2010. Our thanks goes out to Susan Netboy of Greyhound Protection League who financed most of this amazing rescue and to all the groups who took in multiple greys over the last year.

Red Fern Flyer aka Fernie, was one of these fortunately hounds.

He came from Guam very neglected, skin and bones enduring an injury that resulted in us finding out during a routine dental, that a canine tooth had been lodged in his nasal cavity from a blunt trauma, probably for months! Thankfully his surgery went well and he recoverd. He remained in foster care first four months in one home, and as needed he moved into another home for another four months for foster care. His big chance came when he was taken to the Solvang Greyhound Gathering in Solvang California and Telma Shaw introduced him to a couple that Fern ran up to. They were not looking to adopt another greyhound, having one already named Sammy, and they had just lost their little peke William, but when they heard the story and all that Fern had gone through, and that he would yet again have to be moved into another foster home, the Gehr’s made the best decision ever.
In the words of his Mami and Papi.

Hi Everyone! Thought we'd send y'all a short (well, kinda short) update on Fernie, who's doing very well in his forever home. It didn't take long for him to establish a routine, eat, sleep, go for a walk, play with stuffie, eat some more, sleep some more... you get the picture, and he loves to go places. When we head for the truck, he stands at the back and waits for the tailgate to come down, then like a gazelle he hops up in the back, heads for the front and sticks his head through so he can see where we're going - very cute! Nothing like a greyhound dripping down the back of your neck while you're trying to drive.

Every morning promptly at 8:00 AM - he's standing at the sliding door wit his stuffie in his mouth waiting to be let out in the yard. He frisks around for a while, then it's back to the door, "Is it time for breakfast yet?" He's even got laid back ol' Sammy chasin' him around a bit. By the way, Sammy's foot is finally starting to get back to normal. He's hopped around, keeping the right front off the ground for a month after he lost the toenail and it got infected. Good to see him back to walking and running normally. Having Fernie around is good incentive, he's such a playful boy. Fern's latest new game is to play fetch with his stuffie, then bring it back and give us a big fake growl when the tug-o-war starts, as if to say, "I'm the fiercest one ya know!" When he's done playing, he likes to lean on us - his way of saying thanks for a good game.

We've kept him on Holistic Health Chicken with lamb wet food and an Omega-3 capsule mixed in every meal. His coat is getting nice and shiny, and the dandruff is down to a bare minimum. We think the brush routine for he and Sammy is helping a lot too. First, they get back-combed with a rubber tipped hair brush, then a thorough going over with the Furminator, and then a final rub down using only our hands. They both love the treatment and will stand there motionless for the 10-15 minutes it takes to finish. Guess we would too if we had someone to pamper us every day like that! Fernie had his first bath since coming home with us too. We waited for a warm day, then took him out on the lawn and did the deed. He stood with stoicism until we were done with the final toweling, then took off like a shot and harpooned head first into the grass, rolling around like a horse taking a big ol' dust bath - hysterical.

We could go on, but this is supposed to be short, remember? Anyway, we love our boy, and we think Sammy is rather fond of him too. We're blessed to have Fernie as our newest family member. Can't thank all of you enough for having the heart and means to rescue him from those dreadful conditions. He's a happy boy now!!!!